I assure you I haven’t been resting on my laurels, though. Here’s a snapshot of the end of 2016… a sort of “Year in Review” if you will.

A few weeks ago I just finished my 2016 Convention and Signing Appearances circuit, which consisted of 31 conventions and appearances in 2016.

As can be seen in the “Signing and Appearances” tab here on the site, I’ve already got a few signings and appearances lined-up for 2017 starting in February… and the schedule will of course get more and more full in the coming months. As always, I look forward to seeing a lot of you on the road!

During the last leg of the signing tour I was promoting not one, not two, and not three… but FOUR new books:

TALES OF MR. RHEE Volume 3: “Those Who Fight Monsters…” 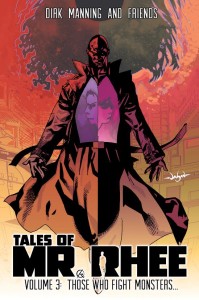 Recently having been freed from the P.R.A.D.S. Asylum by Charity of The P.R.O.M.I.S.E. Group, Mr. Rhee sets about to carefully decide who he can trust in the New World Order, and in doing unknowingly sets-off a domino effect of events (and alliances) that could tips the balance of the scales forever. This book comprises five 22-page chapters that each focus on a different character and are each illustrated by a different artist or art team, including Marianna Pescosta and Alessandro de Forasari, Seth Damoose and Anthony D. Lee,  Austin McKinley and Anthony D. Lee, Leonard O’Grady, and Howie Noel as well as some surprise contributions by Josh Ross and Jim Reddington… all with a gorgeous cover by Jason Pearson.

This latest volume of the series introduces several new characters to the series as well as definitively connects to the mythos of NIGHTMARE WORLD in one giant uber-story… and it’s really good. RHEE-ly good, even. I think I can say without reservation that each and every artist in this book has done the best work of their career to date in these pages, and the scope of how big the story of TALES OF MR. RHEE is going to be is finally laid bare here for the first time.

Yeah… I can’t wait for everyone to read this one!

TALES OF MR. RHEE Volume 3 will be available in comic shops nationwide from Devil’s Due Publishing by the end of the month now that most of the Kickstarter backers have received their *Kickstarter Exclusive* hardcover copies of the book.

LOVE STORIES (TO DIE FOR) Volume 1 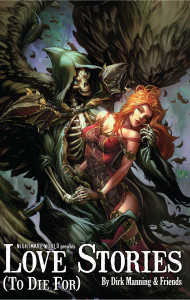 LOVE STORIES (TO DIE FOR) Volume 1 collects the two stories originally published in a double-sized one-shot by Image Comics as well as three new full-length stories and a bonus prose story all in one gorgeous TPB with a cover by Nei Ruffino. The stories in here include tales of star-crossed lovers trapped on a spaceship overrun by aliens (illustrated by Owen Geini), an overzealous guardian angel (illustrated by Howie Noel), vikings versus vampires (illustrated by Richard Bonk and Sean Burres), an aging professional wrestler trapped in the ring with his protege in what is literally the fight of his life (illustrated by Seth Damoose and Anthony D. Lee), and a rural zombie apocalypse (illustrated by Anthony Peruzzo).

The collection then ends with a bonus prose story written by me titled “If You Call, I Will Not Answer” which is quite possibly the most heart-wrenching thing I’ve ever written… and that’s saying a lot considering that this book is already titled LOVE STORIES (TO DIE FOR). Seriously, folks… it physically hurt me to write this one. Brace yourselves…

LOVE STORIES (TO DIE FOR) Volume 1 will be available in comic shops nationwide from Devil’s Due Publishing in January 2017.

NIGHTMARE WORLD Volume 4; “The Morning After” 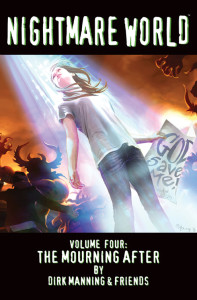 No… your eyes are not deceiving you! At long last, the finale to the NIGHTMARE WORLD quadrology will be seeing print thanks to Devil’s Due Publishing!

This final collection in the series contains a majority of stories that originally appeared in the online incarnation of the series that have since been either remastered (such as the case with the Kaiju classic “This Town Ain’t Big Enough For the Both of Us”) or completely rewritten and redrawn (such as the superhero homage “There’s No Home for You Here” and the apocalyptic thriller “Everyone I Went to High School With is Dead”) as well as several stories that are brand new for this collection (including the somber bar-based swansong “Someone Like You”). Several artists from the three previous NIGHTMARE WORLD volumes returned to illustrate a story for this final collection, and several new faced joined the mix for this finale, including Dan Dougherty, Sally Scott, Howie Noel, Marianna Pescosta, and more.

And, of course, this collection features one last gorgeous wrap-around cover by series artist Kristen Perry (who recently joined the world of social media, starting with an Instagram account at that link).

I don’t think a month — let alone a convention or signing appearance — goes by without someone asking me about NIGHTMARE WORLD Volume 4, so I’m tickled to announce that it’s finally being released by Devil’s Due Publishing this Spring.

So in other words… I’ll have a few new books for all of you to pick-up when you see me on the road in 2017, everyone. Huzzah!

The NIGHTMARE WORLD OMNIBUS Broke All Records for Devil’s Due with a $45K+ Kickstarter Campaign!

And then, of course, there’s the NIGHTMARE WORLD OMNIBUS, which I pre-released via Kickstarter on Halloween.

The NIGHTMARE WORLD OMNIBUS will feature all 52 stories from all four volumes of NIGHTMARE WORLD, reshuffled in a “Director’s Cut” order of my own choosing that best reflects how I’d like the series to be read in one sitting. 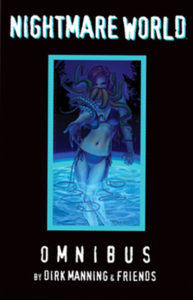 We set a goal of receiving $13,000 in pledges/pre-sales in 30 days for the book to become a reality… only to hit the goal in 8 hours. We then unlocked the 13th Stretch Goal — which upgraded the book to a leatherbound, gold-gilded deluxe edition — in two weeks, making it that every NIGHTMARE WORLD OMNIBUS purchased through the campaign would now become the *Kickstarter Exclusive* NIGHTMARE WORLD BIBLE variant. 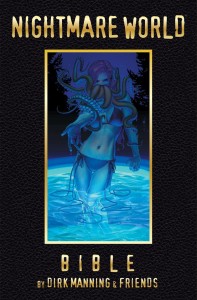 We then ended the campaign with a total of $45,321 in pledges, unlocking a total of 17 Stretch Goals, which now included a bonus full length “behind the scenes” NIGHTMARE WORLD comic and a *Kickstarter Exclusive* slipcase.

Yes… a freaking slipcase for the already super-deluxe gold-gilded leatherbound edition of the book.

Oh… and as I mentioned in the headline, the Kickstarter campaign for the NIGHTMARE WORLD OMNIBUS broke all the previous records for Devil’s Due, too… so there’s that.

Have I mentioned how much I love my readers… and how much people love this series?

As I mentioned earlier, I’ll be returning to the road in February in 2017, and my convention circuit for the year is already going to be including some exciting first-time destinations, including Emerald City Comic Con in Seattle as well as me returning to some of my other favorite shows of the year, including C2E2 in Chicago, Fantasticon in Toledo, and Cherry Capital Comic Con in Traverse City.

I’ll also be using the next few months off the road to be working on new books to be released late 2017 and (hopefully) early 2018, including TALES OF MR. RHEE Volume 4, WRITE OR WRONG Volume 2(!), and MARIACHI… for starters.

For the most up-to-date updates on what I’ll be doing and where I’ll be, please consider subscribing to my monthly e-newsletter. As it says, I only send the e-mail once a month, and I assure you it’s written with love and care by me rather than some automated drones or something.

Until then, be well… and thank you for making 2016 the most successful year of my writing career to date. That being said, I’m extremely excited about what’s to come in 2017 — and beyond!