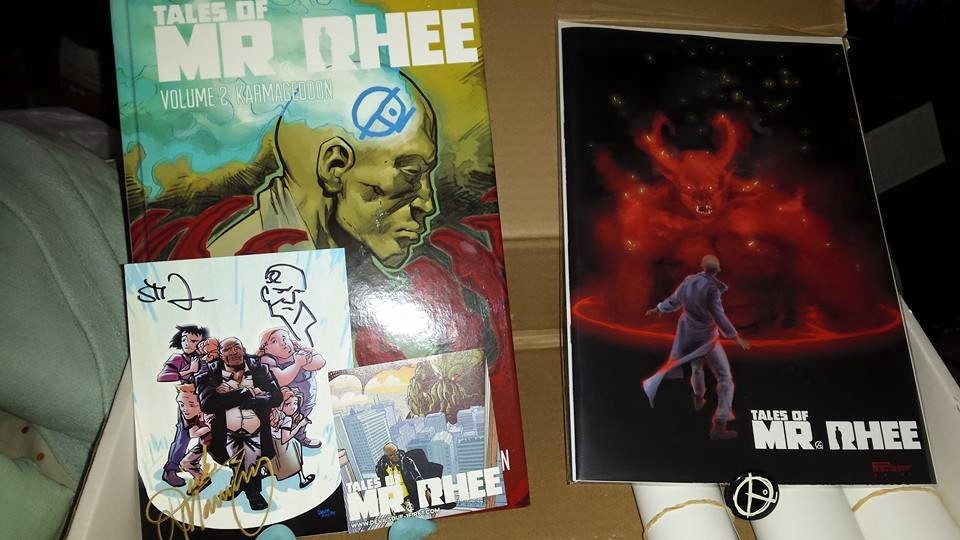 In the past week most of the backers who backed the Kickstarter for TALES OF MR. RHEE Volume 2: “Karamgeddon” received their Kickstarter Exclusive hardcovers, as well as the plethora of stretch goals that were reached thanks to the enthusiastic support of everyone who backed the project, bringing the grand total of funds raised on the first two TALES OF MR. RHEE books to just shy of $40,000!

Being the type of guy I am, rather than pocket the extra money, I kept adding more and more swag to the hardcovers, resulting in everyone who pledged for one also getting limited edition bookplate signed/head-sketched by myself and series artist Seth Damoose, a glow-in-the-dark pin, a bonus comic containing TWO new TALES OF MR. RHEE comic stories, THREE massive art prints, and a bonus sticker.

For those of you who missed this campaign, everything contained in what’s been called “The big box of Dirk” was only $25 shipped right to each backer’s door, because, again, I wanted to reward everyone who pledged with all kinds of bonus swag. If this seems like an incredible deal to you (which, honestly, it should), keep that in mind when we run the Kickstarter for the collected edition of TALES OF MR. RHEE Volume 3 this Spring. Speaking of which…

FREE COMIC ALERT: TALES OF MR. RHEE Volume 3 will be free online for the next five months!

Call this one a RHEE-turn to my roots.

Back in 2002 (yes — 11 years ago!), I launched my first comic series, NIGHTMARE WORLD, as an online series. My plan was to publish online first and then bundle the stories together as print issues for sale with some cool extra content.

Little did I know at the time (as I was just starting out in comics) that the industry was not yet prepared for things such as “digital to print” and “small print runs,” and as such NIGHTMARE WORLD did not start getting collected in print until several years later when we were picked up by Image Comics in 2009.

I’ve always loved the idea of going digital to print, though, because it allows for free digital reading on a daily basis (just like comics in the newspaper) while also eventually allowing for a nice, premium print edition of the work (since, ultimately, I’m still a BOOK person at heart).

Fast-forward to the closing months of 2015 and, at last, technology and the industry is to the point where I can seamlessly execute my vision for true “digital-first” comic distribution with TALES OF MR. RHEE Volume 3: “Those Who Fight Monsters…” via Devil’s Due/First Comics.

Here’s the deal, my f(r)iends: Over the course of this week we’ll be releasing the first 13 pages (of course) of the first issue of RHEEv3 online for free, and starting next week we’ll continue to release a page a day, every Monday through Friday… and we’ll be doing this for the next five months.

Five issues, five artists/art teams, five self-contained yet intertwining stories about a magician who knows monsters still exist in a post-rapture world that wants to deny it.

If you’ve never read TALES OF MR. RHEE before, this is a perfect jumping-on point. If you’re already a fan of the series, wowza, are you in for a treat.

Here’s the link. Share it with your friends, and be sure to check it on your phone, computer, or tablet daily at 9:00 EST for new content.

NEWS FLASH: Yes, I have a face…

I tend to shy away from on-camera interviews for the most part (it’s for your safety, really, as I don’t want anyone to stare at my hideous visage for too long and turn to stone), but I enjoyed this video interview with Comicverse from New York Comic Con so much that, darn it all, I just have to share it with you.

I’ll understand if you want to shield your eyes while watching, though… 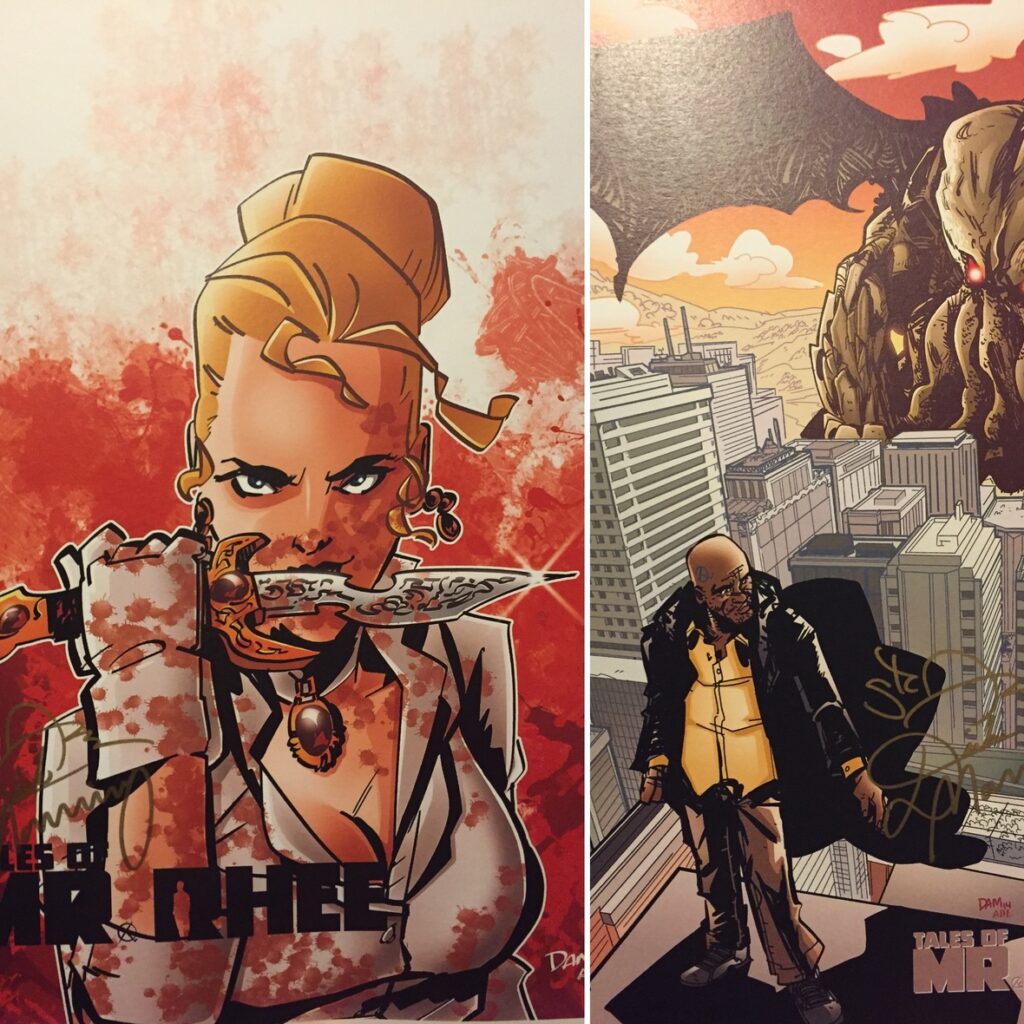 (For those of you who are old-school readers, yes, that’s Thelma Lushkin from NIGHTMARE WORLD appearing in TALES OF MR. RHEE. Brace yourselves… things are going to get bloody in RHEEv3!)

As it turns out, Seth has a few sets of the prints left, and they’re $25 for the set including shipping to anywhere in the continental United States. If you want a set (as these prints will NOT be reprinted like this), e-mail him directly at seth.damoose@gmail.com sooner than later. The holidays are coming, after all… treat yourself!

STAY HARD: If you missed the RHEEv2 Kickstarter…

OK, if you’ve read this far into the newsletter you’re either really dedicated… or very bored at work… so here’s a little bonus tidbit for you:

If you missed out on the TALES OF MR. RHEE: “Karmageddon” Kickstarter campaign but really, RHEE-ly want one of those limited edition hardcover editions, you just might be in luck, as there are TWO stores who have a few copies each:

I’m lucky enough to have the continued support of a lot of great comic shops, but these two stores both backed the Kickstarter to get extra copies of the hardcovers… so if you want one, DON’T WAIT TO CONTACT THEM.

There you have it.